A widely held view among Gambian entrepreneurs, particularly the young ones, is that there are limited financing opportunities’ in the country, for start-ups and struggling businesses; however, the Investment Manager at the Gambia Angel Investors Network (GAIN), Mr. Muhammed Alieu Barry, had a different take on it. He asserted that investments opportunities are “readily available” but most of the Gambian start-ups, entrepreneurs or companies “fall short of the eligibility” criteria that investors usually demand.

According to the official version on its website, GAIN is a “not for profit” entity set up for the purpose of organizing seed funders (“Business Angels”) to invest in Gambian businesses.

“GAIN facilitates the introduction of Gambian entrepreneurs to potential investors through presentations and other mechanisms. It consists of individual angel investors interested in financing privately held companies or ventures typically in an early stage of development.”

In an exclusive Mansa Banko Online interview with Manager Barry on April 4, 2022 at his Office on MDI road in Kanifing, he maintained that “investments [opportunities] and investors are always available” in the Gambia, but said his office has realized that finding the right entrepreneurs who met all the eligibility criteria, is rare, despite the many start-ups and entrepreneurship trainings and seminars bankrolled in this country.

Barry is of the view that most Small Medium-sized Enterprise companies are not investment-ready simply because they are not rightly registered or setup, reminding that the Companies Act (of The Gambia) prohibits potential investors from investing in sole-proprietorship businesses. He added most Gambian entrepreneurs fall under that category, stressing: “Investors cannot invest in sole-proprietorship businesses. And this is the Companies Act.”

Barry, a holder of Bachelor’s degree in Accounting from the University of The Gambia (UTG), explained that GAIN was created to connect potential angel investors and the right entrepreneurs by organizing networking sessions, pitch presentations and webinars for those within the entrepreneurship ecosystem.

The GAIN Investment Manager further opines they have registered tremendous successes in convincing Gambians living in the diaspora to invest at home, noting what they had realized was that most of them wanted to give back but there was lack of such channels, and therefore, his office came to bridge that gap for entrepreneurs and potential investors.

According to Barry, the network has 17 ‘angel members’ and membership is open to all residence in The Gambia and Gambians at home and in the diaspora. He said his office promotes early-stage investment for investors and the provision of access to financing through investments for entrepreneurs in the Gambia such as equity, debt and quasi-equity instruments.

They are not focusing on any specific sector but all sectors, he said, adding it was a project under the Youth Empowerment Project (YEP) which was founded in January 2020, but the idea was conceived in 2019 by the YEP.

Barry informed that GAIN now operates from its own Office spaces situated at Sahel Institute building on MDI road in Kanifing, and that in their networking sessions, his office usually facilitates seasoned speakers, who have expertise and certain competencies, to share their knowledge and experiences with these start-ups, and entrepreneurs to inspire them. He pointed out that such events add value in building the ecosystem and mentorship in these young entrepreneurs.

While indicating their trainings are few and investment ready-focused, not like training everyone, Barry reported the Network has trained at least 50 entrepreneurs– describing them as ‘future champions’ of their industries–, attached entrepreneurs with experts as well as numerous pitch trainings; reaching hundreds of people since inception. He maintains that GAIN is seeking to support the future champions of their industries. “Part of my job as Investment Manager is to meet entrepreneurs and investors,” he disclosed.

The ambitious Investment Manager cited access to qualified entrepreneurs who are investment ready, and poor networking of people within the same ecosystem, as their challenges, while the achievements include the sealing of two investments for a leather bag-brand company- Daraja Limited run by a young lady who sells her products in Africa, Europe and the Americas, and an e-commerce delivery platform called Indil Limited— a wolof word for bring.

Barry hopes to see GAIN becoming the thought leader in the country’s investment industry, as he pointed to moves by the Central of The Gambia to establish a capital market for the Gambia. He said that bill had already been passed by the National Assembly. 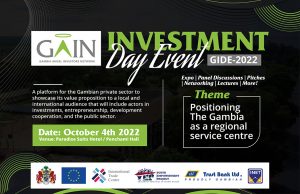 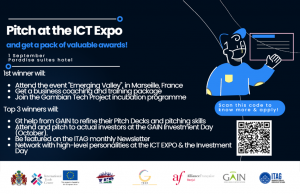 The Gambia Angel Investors Network
is a member of:

The Gambia Angel Investors Network (GAIN) is a “not for profit” entity set up for the purpose of organizing seed funders (“Business Angels”) to invest in Gambian businesses.